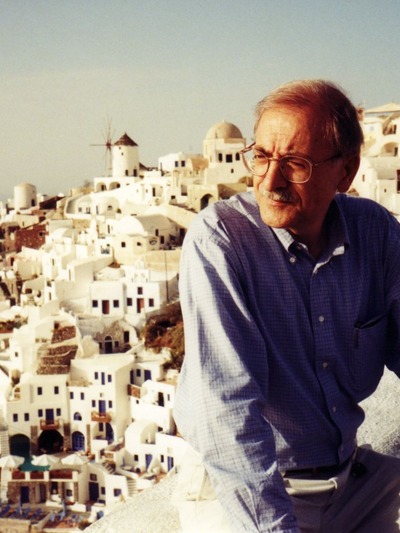 Education: Stratos Constantinidis was born to 2 Greek refugees – Eustratius (1907-1950) and Philadelphia (1912-1982). His parent’s families were both driven out of their homelands in the Ottoman Empire during the aftermath of the Greco-Turkish War and were settled in Greece in 1922. Constantinidis was born in Thessaloniki in 1949 and was named after his father in 1950. He grew up in a trilingual family and a multilingual neighborhood while he was learning Modern Greek at the 42nd Grammar School (1955-1961). At home he was introduced to the works of ancient Greek authors – beginning with Homer – by his mother, her sister Odyssey (1909-2014), and their brother Plutarch who was tortured during the Greek Civil War (1944-1949) and was disabled for the rest of his life. Constantinidis was taught Ancient Greek language and literature at Anatolia College (1961-1968) by eminent high-school teachers such as Nikolaos Papahatzis (Pausanias’ Peregrination of Greece, 5 vols), Anastasios Georgopapadakos (Ancient Greek Grammatology), and Nikos Hourmousiadis (1930-2013) who became a university professor in 1971, a translator of Euripides’ plays, and an author of 4 books on Greek drama. Constantinidis studied Acting/Directing at the Haratsaris Theatre School (1969-1972) and made his professional debut with the theatre company of Manos Katrakis (1908-1984). Concurrently, he also studied English Literature (along with the classics) at the National University of Athens (1970-1971) and then at the Aristotle University of Thessaloniki (1971-1974) where he earned a B.A. degree in English Language and Literature. In 1973 he was awarded a scholarship and attended a seminar on Shakespeare at Cambridge University in the UK. At this time, he visited London and he saw Vanessa Redgrave as Cleopatra in the modern-dress production of Shakespeare’s Antony and Cleopatra directed by Tony Richardson at the Bankside Globe Playhouse. He translated this play into Greek after he returned to Greece and graduated from the Aristotle University of Thessaloniki. Then, his career was put on hold for 2 years and 3 months because he was drafted to serve in the Greek Army. During his service he was promoted to the rank of second lieutenant and was honorably discharged in 1977. He decided to continue his education in the United States. He met and sought the advice of Dr. Howard Stein, Professor of Theatre Studies at the Yale School of Drama, who highly recommended the University of Iowa because it had the top programs in playwriting and fiction writing in the country at that time. Constantinidis was admitted to the University of Iowa where he earned an M.A. degree (1978-1980) in Playwriting and American Drama from the Department of Speech and Dramatic Art, and then a PhD degree (1980-1984) in Critical Theory and Comparative Historiography from the Department of Communication and Theatre Arts. His first academic advisor was Samuel L. Becker (1923-2012) and his dissertation advisor was Ray L. Heffner (1925-2012). Constantinidis taught in the Department of Classics at the University of Arizona (1985-1986) where he served as the first director of its Modern Greek Program. He then joined the Department of Theatre at The Ohio State University (1986-present) where he also became an affiliated faculty member in the Department of Classics, the Center of Middle East Studies, the Center for Medieval and Renaissance Studies, and the Center for Slavic and East European Studies. He is an alumnus of the School of Criticism and Theory at Dartmouth College (1987) where he studied with Jacques Derrida (1930-2004), Michael Riffaterre (1924-2006), and Sacvan Bercovitch (1933-2014). He became a US citizen in 1995 to earn the right to vote in the United States as well. He is also an alumnus of the OSU President’s and Provost’s Leadership Institute (2006-2008), and took several seminars at The John Glenn School of Public Affairs Management Advancement for Public Service.

Research: He is the author of Theatre under Deconstruction (Garland Publishing, 1993, 336p) and Modern Greek Theatre in a Quest for Hellenism (McFarland Publishers, 2001, 197p), which was translated into Greek in a revised expanded edition (Armos Publishing, 2011, 388p). He is editor of The Reception of Aeschylus Plays through Shifting Models and Frontiers (Brill, 2017 400p), and of Greece in Modern Times: an Annotated Bibliography of Works Published in English in Twenty-Two Academic Disciplines (Scarecrow Press, 2000, 687p), as well as editor of 9 volumes of Text & Presentation (McFarland Publishers, 2000-2009, 2,070p), 4 volumes (eight issues) of the Journal of Modern Greek Studies (Johns Hopkins University Press, 2003-2006, 1,412p), a special issue on Classical Greek Drama in Modern Performances (1989, 102p), 2 special issues on Modern Greek Drama and Theatre (1996, 2007, 387p) and 2 special issues on Greek Film and Cinema (2000, 2011, 392p). He translated Kalliroi Siganou-Parren’s The New Woman (Oxford University Press, 2001, 32p), and Iakovos Kambanellis’ A Tale without a Title (Elikia Books, 1989, 41p) into English and William Shakespeare’s Anthony and Cleopatra (Polymnia Publishers, 1978, 218p) into Greek. His research papers, essays, and reviews were anonymously peer-reviewed and published in various journals in Germany, Greece, Israel, the United Kingdom, and the United States, including Poetics Today, Film Criticism, Comparative Drama, Kodikas/Code: Ars Semeiotica, Theatre Survey, Theatre Studies, Text & Presentation, New Theatre Quarterly, the Journal of Dramatic Theory and Criticism, the Journal of Hellenic Diaspora, the Journal of Modern Greek Studies, Byzantine and Modern Greek Studies, Parabasis, World Literature Today, Classical  World and the Classical Review. Some of his research papers were published in edited books, including The Cinema of the Balkans (Wallflower Press, 2006), Perspectives on Teaching Theatre (Peter Lang, 2001), and The Riddles of the Sphinx (Tolidis Bros, 1996). He has also given 72 talks as a panelist or as a guest speaker at conferences and other events in Canada, Finland, Greece, Israel, Sweden, the United Kingdom, and the United States. He is a member of the Dramatists Guild, the Authors Guild, the Association for Theatre in Higher Education, the American Association for Theatre Research, the International Federation for Theatre Research, the American Philological Association, the MLA, etc. He has also authored 3 plays and one novel. His most recent play is Senate Hearing (2019).

Teaching: He has designed and taught a total of 44 different graduate and undergraduate courses in 3 American universities – the University of Iowa, the University of Arizona, and The Ohio State University. He was a semi-finalist for an Alumni Award for Distinguished Teaching at The Ohio State University in 2007. He is credited for having taught the first course on Modern Greek drama in the United States. He has advised graduate students from Belgium, China, Greece, India, Iran, Taiwan, Turkey, South Africa, and the United States. He advised a total of 51 PhD dissertations, M.A. theses, and M.F.A. theses. The titles of some of the doctoral dissertations that he directed are: The Comfort Women in Northern East Asia as Represented in Plays, Rallies and Exhibits by Yi-Ping Wu (INSC, 2019), The Archaeology of Liveness by Dries Vandorpe (INSC, 2015); Six Companies in Search of Shakespeare by Andrew Blasenack (Emory & Henry College, 2012); The Negro Ensemble Company from 1967 to 1978 by Darius Williams (Lehigh University, 2012); Rewriting the Greeks by Bethany Banister Rainsberg (INSC, 2010); The Color of Hollywood by Monica White Ndounou (Tufts University, 2007); The Performance of Black Masculinity by John Harris (University of North Carolina at Chapel Hill, 2003); Secular Messianism and Nationalist Ideas in the Plays of Adam Mickiewicz and William Butler Yeats by Eileen Krajewski (Fairchild Air Force Base, 2002); Variations of Virtual Reality in Theatre and Film by Kaizaad Kotwal (Ohio State University at Marion, 2000); Ambiguity and Deception in the Covert Texts of South African Theatre by Allan Munro (University of Pretoria, 1997); Playing God in Live Theatre by Kathleen Colligan Cleary (Sinclair Community College, 1994); The Rise of Directorial Influence in Broadway Shakespearean Production by Steven Marc Weiss (Coe College, 1994); and Transformations of Terror by Brian Rose (Adelphi University, 1993). Two of these dissertations were reworked and published as books: Monica White Ndounou, Shaping the Future of African American Film: Color-Coded Economics and the Story Behind the Numbers (New Brunswick: Rutgers University Press, 2014); and Brian Rose, Jekyll and Hyde Adapted: Dramatizations of Cultural Anxiety (Westport & London: Greenwood Press, 1996).

Service: He served as Director of The Comparative Drama Conference for 5 years (2000-2004). (www.facebook.com/comparativedramaconference/). He edited Text & Presentation for 10 years (2000-2009), and redesigned it in 2004 by turning it from an annual journal into a peer-reviewed book series (www.mcfarlandpub.com). He edited the Journal of Modern Greek Studies for 4 years (2003-2006) (www.press.jhu.edu/journals/mgs). He founded and ran the annual Exchange Colloquium for Graduate Students from 5 universities – Ohio State University, University of Pittsburgh, Northwestern University, Indiana University, and Bowling Green State University – for 3 years (1991-1994). He served as Chair of the M.A./PhD program in Theatre History, Criticism and Literature (renamed Performance, History, and Theory in 2015) for 9 years (1990-1991, 2002-2003, 2005-2008, 2016-2020). He has also organized 38 interdisciplinary national and international conferences, symposia, colloquia, and panels. Under his direction, the Comparative Drama Conference at The Ohio State University attracted participants from 35 countries between 2000 and 2004, totaling 1,004 paper presentations by faculty and doctoral students from 318 different institutions (61 foreign universities, 200 U.S. universities, and 57 U.S. colleges and academies). He has served on 31 committees at the levels of the department, the college, and the university, including the College of the Arts Faculty Concerns Committee, the Senate Hearing Committee, the College of the Arts Research and Faculty Development Committee, the West European Studies FLAS Fellowships Committee, the Interdisciplinary Faculty Travel Awards Committee, the West European Studies Program Advisory Committee, the Presidential Fellowship Committee, the Fulbright Interview Committee, the International Coordinating Committee, the Center of Medieval and Renaissance Studies Steering Committee, the Nicholas Howe Memorial Fund Committee, and the Faculty Senate of the Arts and Sciences. He also served on the executive boards of two professional associations, including the Modern Greek Studies Association of America and Canada (MGSA). He also served on the MGSA Graduate Studies Committee and its Dissertation Prize Subcommittee. He chaired the MGSA Elizabeth Constantinidis (no relation) Translation Prize Committee. He was also recruited and served as a consultant for the Ohio Department of Education and for the Ministry of Education of Greece three times. He established the Philadelphia Constantinidis Essay in Critical Theory Award ($1,000) to be given annually to the best comparative essay on any aspect and period of Greek drama that was published in English in any journal or anthology in any country between 1/1 and 12/31 in the prior year. (http://blogs.rollins.edu/ drama/conference-awards/) (http://comparativedramaconference.stevenson.edu/award.html). Recipients of the award have been

2017    The award committee determined that none of the nominated papers met the award requirements.

2016    The award committee determined that none of the nominated papers met the award requirements.

2014       Peter E. Portmann (University of Manchester), “Arabs and Aristophanes, Menander among the Muslims: Greek Humor in the Medieval and Modern Middle East.” International Journal of the Classical Tradition 21/1 (2014): 1-29.

2008    The award committee determined that none of the nominated papers met the award requirements.

2007    The award committee determined that none of the nominated papers met the award requirements.