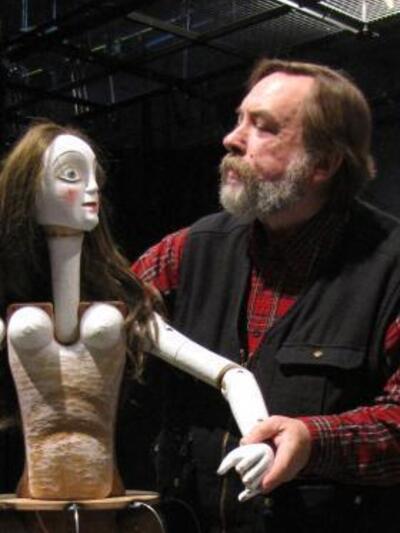 As a specialist in Russian and Czech theatre, Professor Brandesky has traveled to St. Petersburg, Moscow and Prague to study and conduct research in his field. Brandesky has curated and co-curated seven Theatre Design exhibits, among them:  Jaroslav Malina: Paintings and Designs, Curator; Metaphor and Irony 2:  Frantisek Troster and Contemporary Czech Theatre Design, Co-curator; Metaphor and Irony: Czech Scenic and Costume Design 1920-1999, Co-curator; Spectacular St. Petersburg: 100 Years of Russian Stage Design, Curator; and Boris Anisfeld and the Stage, Curator. A book project, 20th Century Czech Theatre Design: Metaphor and Irony Revisited, was published by the University of Iowa Press as part of its Studies in Theatre History and Culture series in April 2007. He recently served as Guest Curator for a Strings Attached: Czech Puppets at the Columbus Museum of Art (CMA) in 2013. He is currently working on a joint Ohio State/CMA exhibit project entitled Shakespeare in Prague—Imagining the Bard in the Heart of Europe, which will open in February 2017.

Brandesky has organized 8 Study Tours to the Czech Republic and most recently took a group of Ohio State University students to Prague in June 2015. The next Czech Theatre Study Tour will travel to Prague in December 2017. He has made numerous scholarly presentations at state, regional and national conferences and has published articles in Theatre Design and Technology, Slavic and East European Performance and the Journal of Dramatic Theory and Criticism. In 2003 he received two awards, one for scholarship and one for teaching. His essay “Spectacular St. Petersburg: 100 Years of Russian Theatre Design” was named the Herbert D. Greggs Outstanding Article by the United States Institute for Theatre Technology and he received the Ohio State University Alumni Award for Distinguished Teaching. In spring 2008 Brandesky received the Outstanding Faculty Scholar Award at the Ohio State University at Lima. He was named the Martha W. Farmer Endowed Professor in Theatre at OSU Lima in July 2012.

Since joining the faculty at Ohio State Lima in 1988, Dr. Brandesky has produced, directed and co-directed 50 productions. He co-created a devised production with Czech designer Petr Matasek for performance in April 2013 entitled aPOEtheosis for the Ohio State Department of Theatre in Columbus. This production coincided with the exhibit Strings Attached: Czech Puppets and featured current Czech puppet/object/alternative theatre principles.