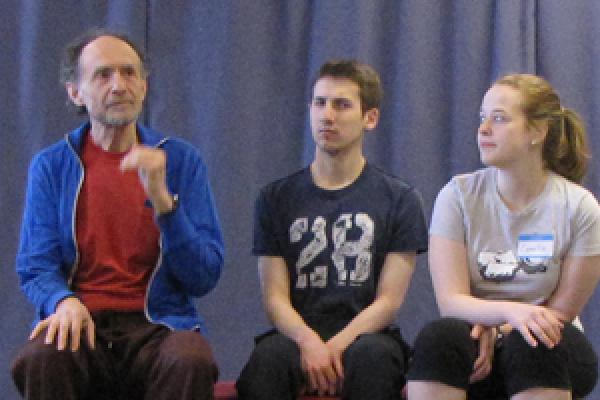 On April 5th and 6th, 2013, the Graduate Theatre Syndicate hosted its fifth annual symposium, “Shifting Boundaries/Crossing Cultures: the Politics, Process, and Performance of Collaboration.” The symposium was co-sponsored by The Performance/Politics Humanities Institute Working Group, Co-Conveners Harmony Bench (Dance), Ryan Skinner (Ethnomusicology), and Jennifer Schlueter (Theatre). The keynote speaker was Stephen Wangh, studied with Jerzy Grotowski in 1967 and is the author of An Acrobat of the Heart and The Heart of Teaching. His playwriting credits include work as an Associate Writer for The Laramie Project and The People’s Temple, which won the Glickman Award for Best Play in the Bay Area, 2005. In addition to his keynote speech, Stephen gave an introductory workshop on Grotowski’s exercises, which he has taught in the United States and internationally. The Graduate Theatre Syndicate was also pleased to welcome special guest Petr Matásek. Matásek is a Czech artist, set designer, director, and associate professor at the Department of Alternative and Puppet Theatre at DAMU, in Prague. Matásek co-directed The Ohio State Department of Theatre’s production of aPOEtheosis with Professor Joe Brandesky. aPOEtheosis was a new devised work of theatre and the two directors were gracious enough to begin this year’s symposium with a public discussion of the challenges of devising new work and collaborating across national and cultural borders. In addition to scholarly papers addressing the symposium’s theme, this year’s event also included several workshops and performances. The Syndicate hopes to continue a trend toward greater inclusion of all disciplines within the Department of Theatre, as well as toward broader engagement with other departments in the Ohio State community and academia in general.