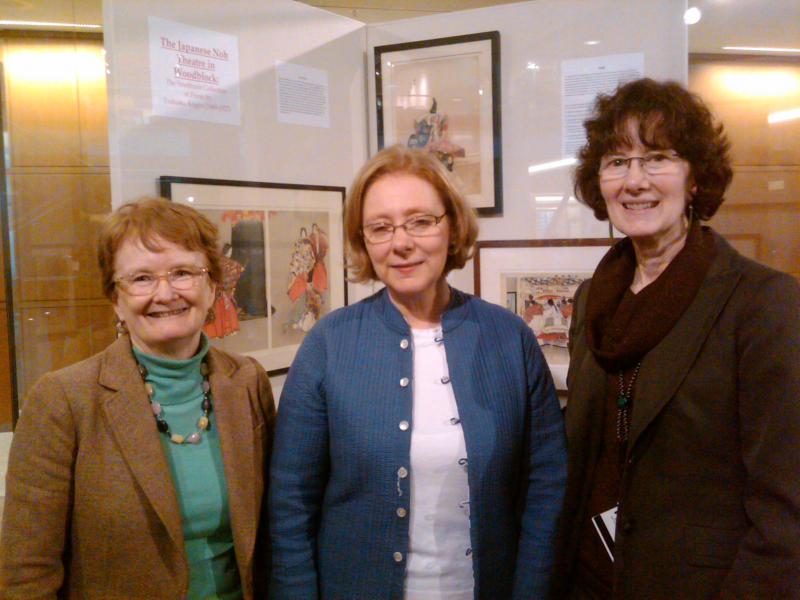 The Lawrence and Lee Theatre Research Institute displayed fifteen woodblock prints by the acclaimed woodblock print artist Tsukioka Kōgyo who produced many spectacular works inspired by the classical Japanese Noh Theatre in the Special Collections Gallery on the main floor of Thompson Library. These prints from the collection of Professors Richard J. and Mae J. Smethurst complemented a lecture by Richard Smethurst, Professor of History at the University of Pittsburgh, on “Tsukioka Kōgyo and the Popularization of Noh, 1869-1927” which the Institute co-hosted with the Department for East Asian Languages and Literatures.

In collaboration with the College of Arts and Sciences Shakespeare Innovation Group, the ongoing initiative with the Royal Shakespeare Company, and timed to take advantage of the RSC Columbus performances of its acclaimed production of Julius Caesar set in contemporary Africa, the Theatre Research Institute displayed materials celebrating Shakespeare and Julius Caesar.  At Thompson Library, the Theatre Research Institute and Rare Books and Manuscripts co-sponsored with the Shakespeare Innovation Group a panel including RSC artistic director Gregory Doran, and Ohio State faculty from theatre, classics, English, and African American and African Studies which drew a large audience from multiple departments across campus.  Accompanying the panel was an expanded display by the Lawrence and Lee Theatre Research Institute and Rare Books and Manuscripts highlighting the outstanding holdings on Shakespeare in the Libraries’ special collections. 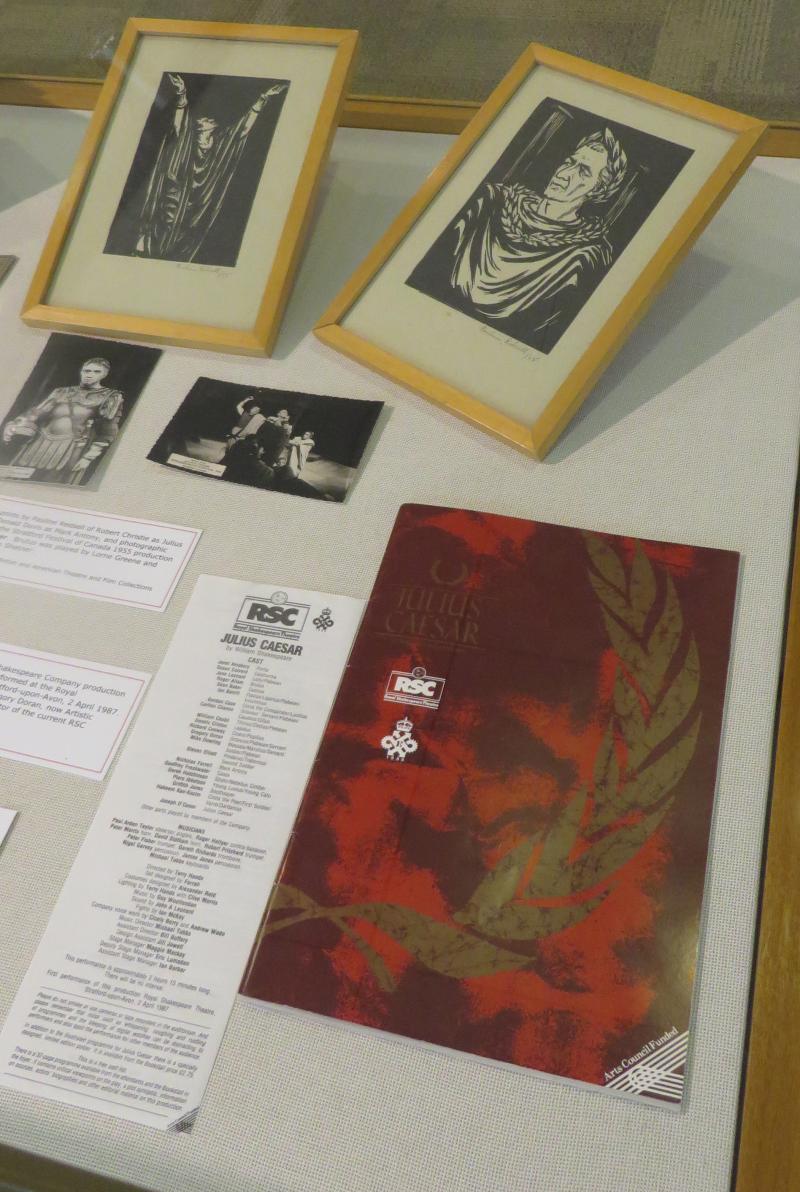 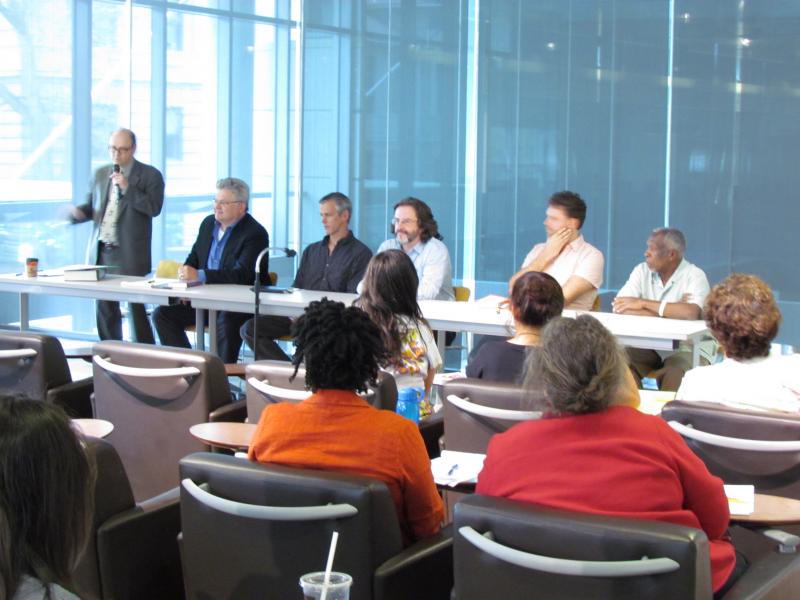 In collaboration with the East Asian Studies Center, the Institute for Chinese Studies and the Department for East Asian Languages and Literatures, the Theatre Research Institute sponsored “Hong Shen and the Modern Mediasphere in Republican Era China,” a symposium bringing together Chinese and western scholars on the work and legacy of Chinese dramatist and Ohio State alumnus Hong Shen whose collection has recently been donated to the Theatre Research Institute by his daughter.  A selection of items from the collection and additions acquired by the Chinese Studies Librarian were on display during the symposium. 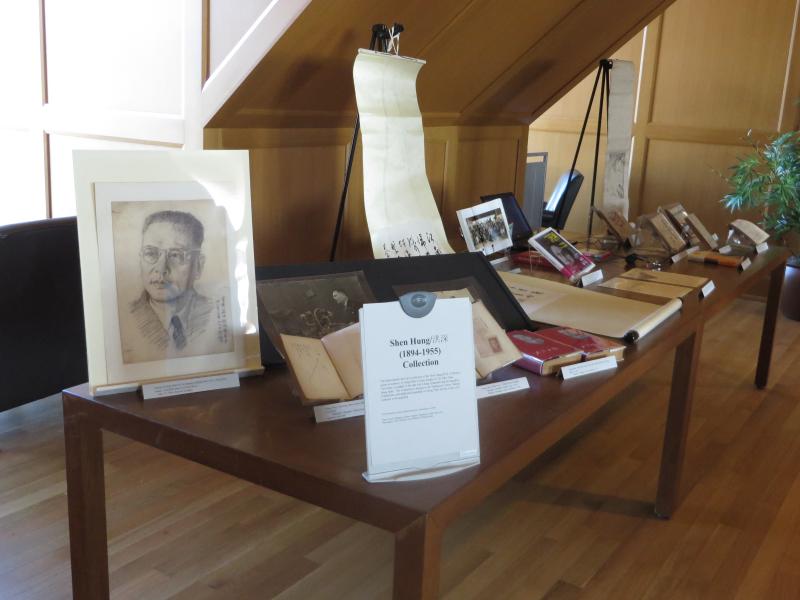 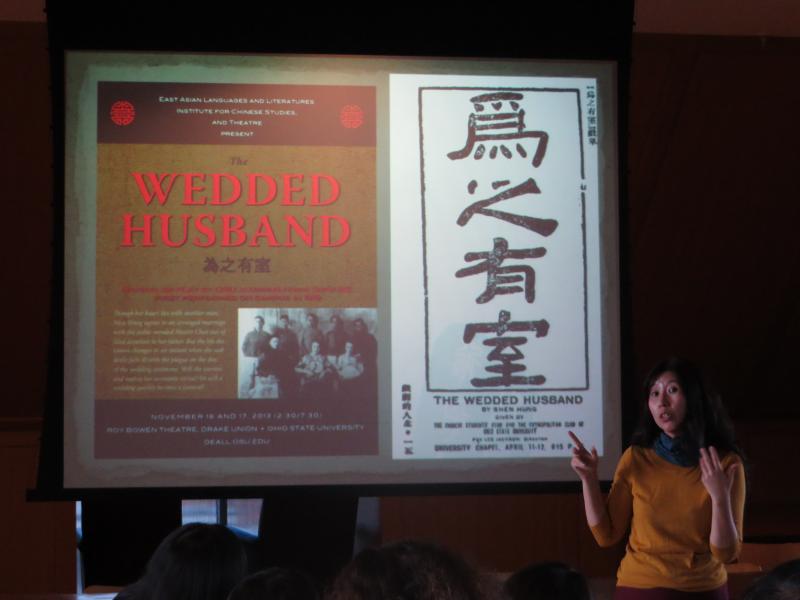 Photo (left): Display of materials from the Hong Shen Collection in conjunction with “Hong Shen and the Modern Mediasphere in Republican Era China” symposium

Photo (right): Ohio State doctoral student Man He shares a portion of her dissertation work in her presentation on Hong Shen, ending with a slide combining the original production of Hong’s The Wedded Husband, the first English language play by a Chinese national, premiered at the OSU university chapel in April 1919 before 1,300 people under the auspices of the Cosmopolitan Club, and the 2013 Ohio State revival. 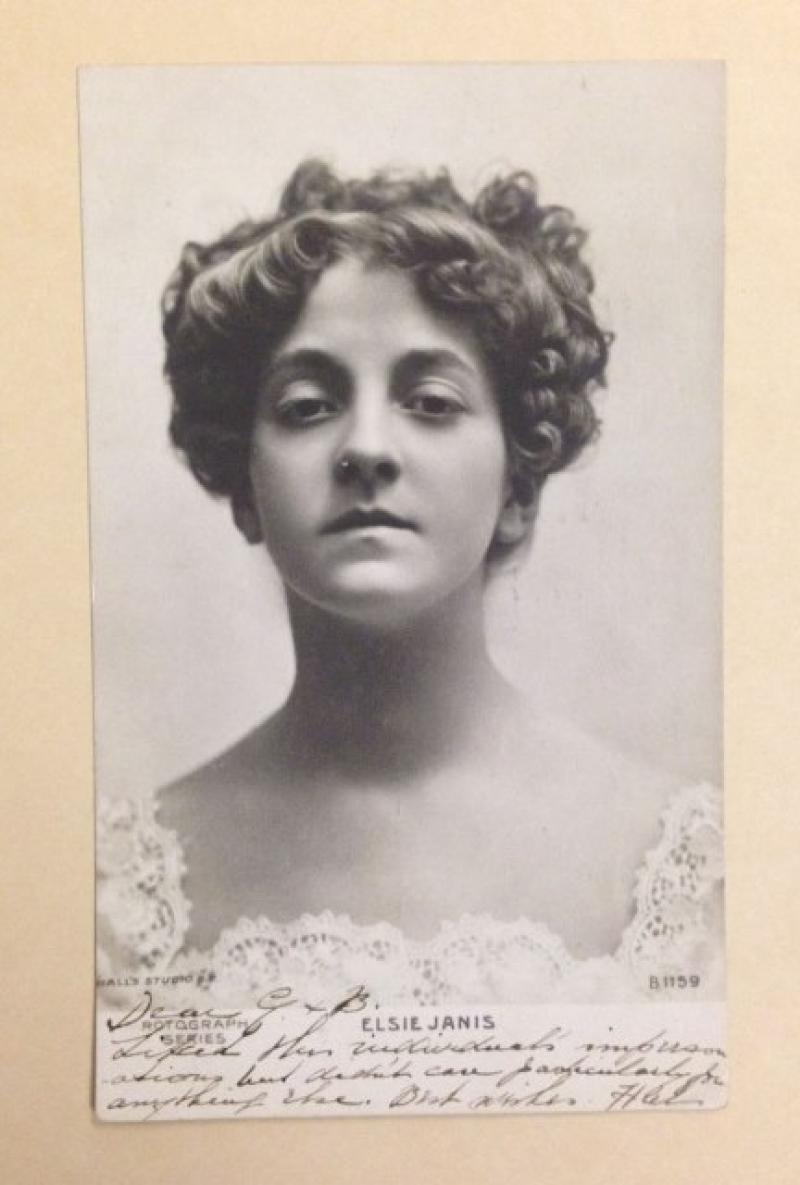 With the Department of Theatre, the Lawrence and Lee Theatre Research Institute co-hosted The First Actresses Symposium which aligned Special Collections with research and curriculum across disciplines including Theatre, and Women’s, Gender and Sexuality Studies, and with programs of the Women’s Place.  This program enhanced the Institute’s role as a critical academic partner and as an intellectual crossroads by promoting discourse and fostering interdisciplinary learning.  In particular, this symposium highlighted Institute holdings on the Actress in the context of their significance to research with an accompanying exhibit, gallery talk, and commissioned play created from TRI’s Elsie Janis holdings.

Co-sponsored by the Department of Theatre and the Theatre Research Institute, the 2013 Lawrence and Lee Theatre Research Institute annual lecture was given by Chris Jones, chief theatre critic for the Chicago Tribune.  The lecture, “The Last Critic Standing?”, was received with enthusiasm by a crowd of over 65 at the Bowen Theatre in the Drake Performance and Event Center. 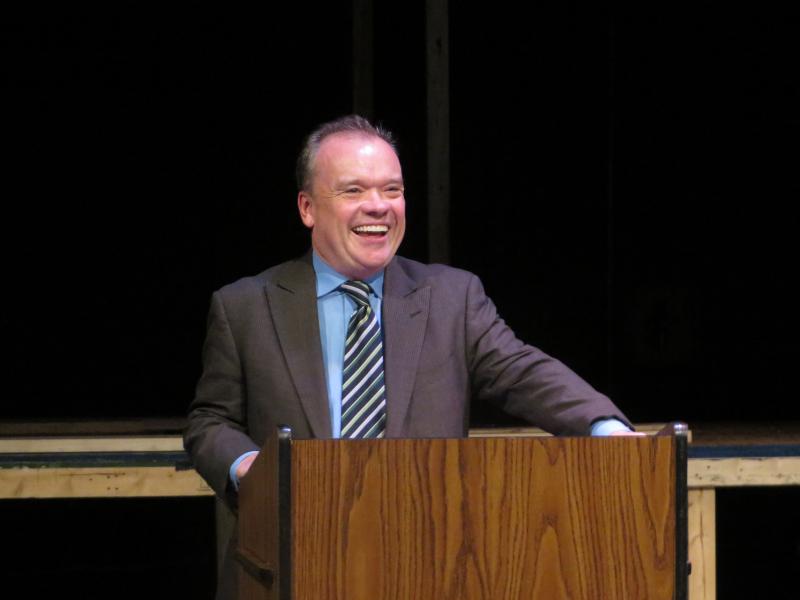 Several faculty have structured courses to explore special collections in order to give students the experience of working with rare, original, and unique materials, as well as to learn about archival research methods.  These courses, which made extensive use of collections and the reading room during 2013 included:

The family of Henry Hewes donated his collection to the Theatre Research Institute (where it joins his earlier papers, the American Theatre Critics Association records, and papers of numerous other critics), documenting the career of Hewes as drama critic for the Saturday Review, editor of Best Plays, longtime chair of the Margo Jones Award Committee, one of the founding critics (with TRI donor Clara Hieronymus) of the American Theatre Critics Association, and Theater Hall of Fame inductee. 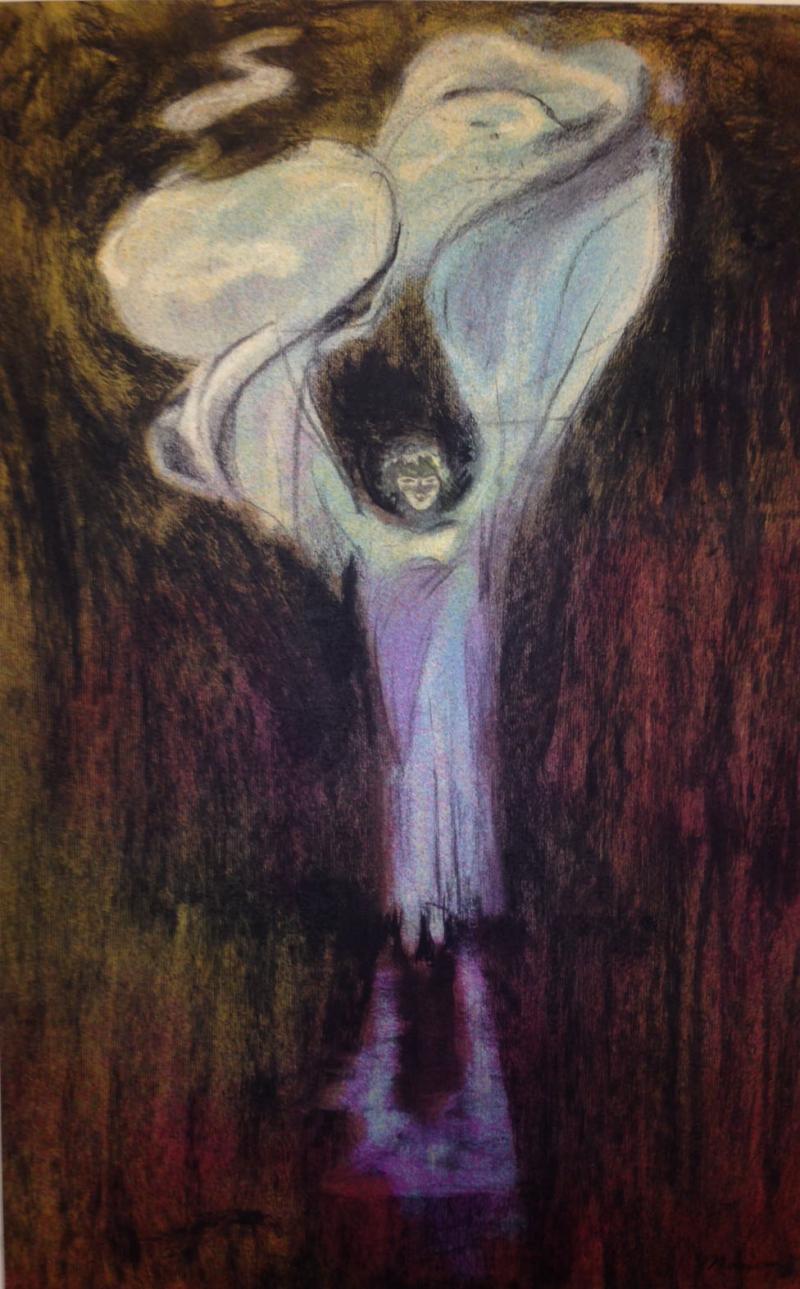 Dance designs and artwork such as a Charles Maurin portrait of dancer Loie Fuller which complements the Theatre Research Institute Dalcroze collections.

Addition to the Carrie Robbins Collection which includes not only her stunning work for theatre but also her work in restaurant design for the Rainbow Room and Windows on the World.

Iva Withers Papers, documenting her work as a musical theatre actress during the “Golden Age” of Broadway including Carousel, Oklahoma, and Guys and Dolls (where she overlapped with TRI and Ohio State donor Isabel Bigley Barnett) and on tour in shows, such as Gentlemen Prefer Blondes and South Pacific. 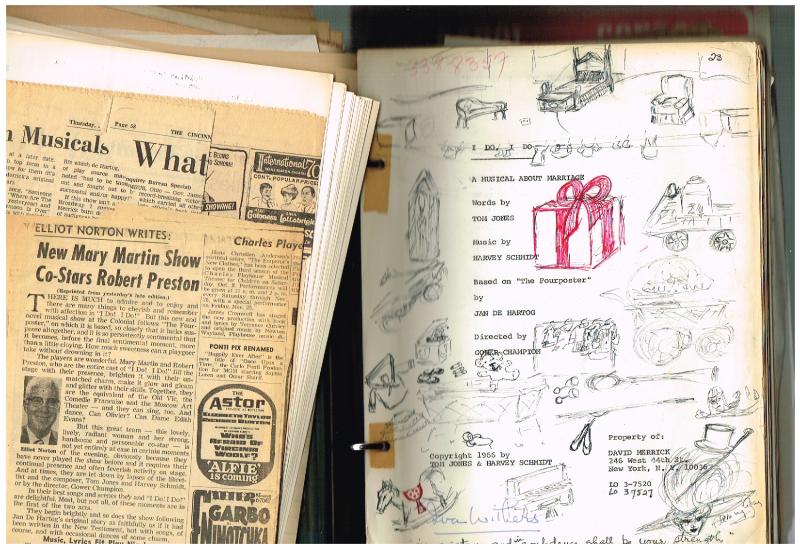 Given by her granddaughter Anthea de Forest, the collection of 19th-century actress Irene de Forest which provides rich resources for both Theatre costume design and popular entertainment curriculum. 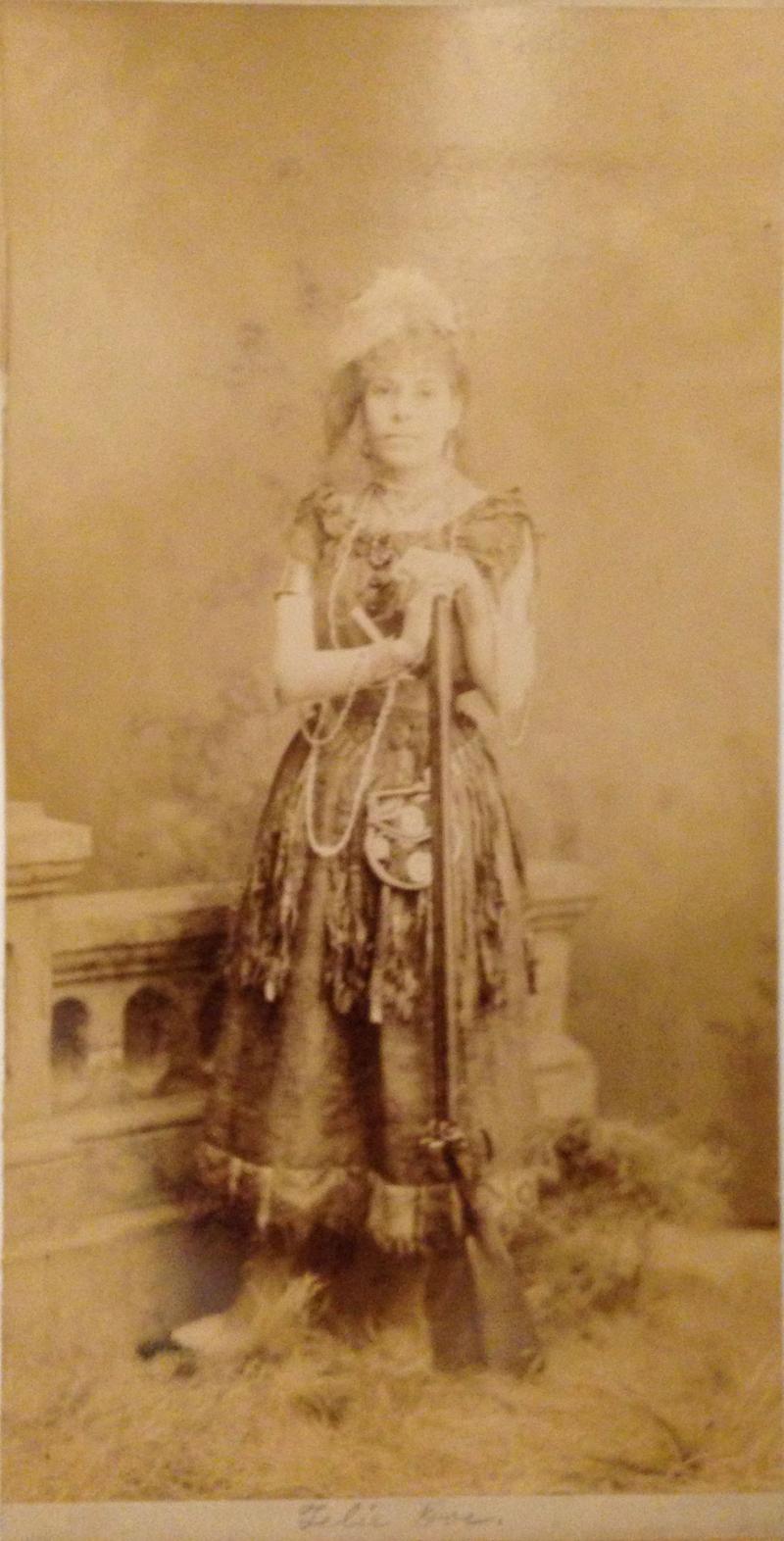 Photo: Actress Irene de Forest as Telie Doe in Nick of the Woods 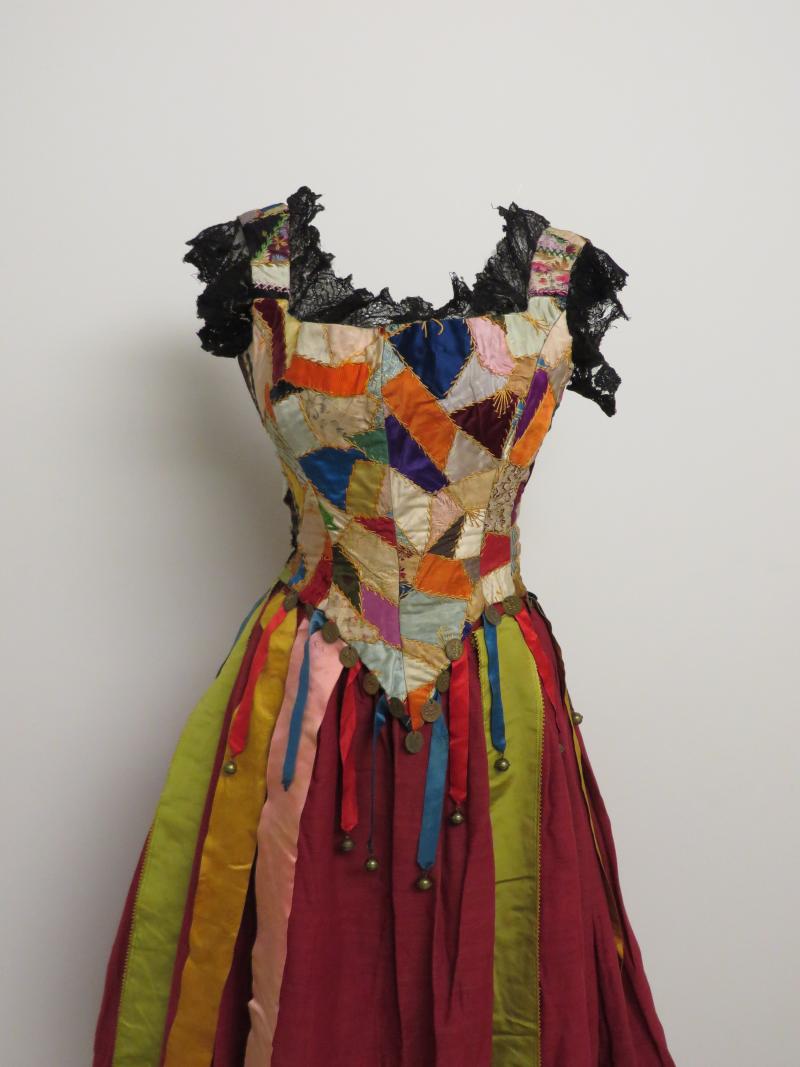 The Dr. Julie “Uberblonde” Vogt’s Archive of the Burlesque Movement, research papers and historical burlesque documents on legendary performer Ann Corio and others which complements the McCaghy Collection of Exotic Dance, used extensively by on- and off-campus researchers.

A significant addition to the Ella Gerber Kasakoff collection left by her as a bequest, documenting her work over decades with Porgy and Bess productions and supplementing the heavily used Robert Breen collection. 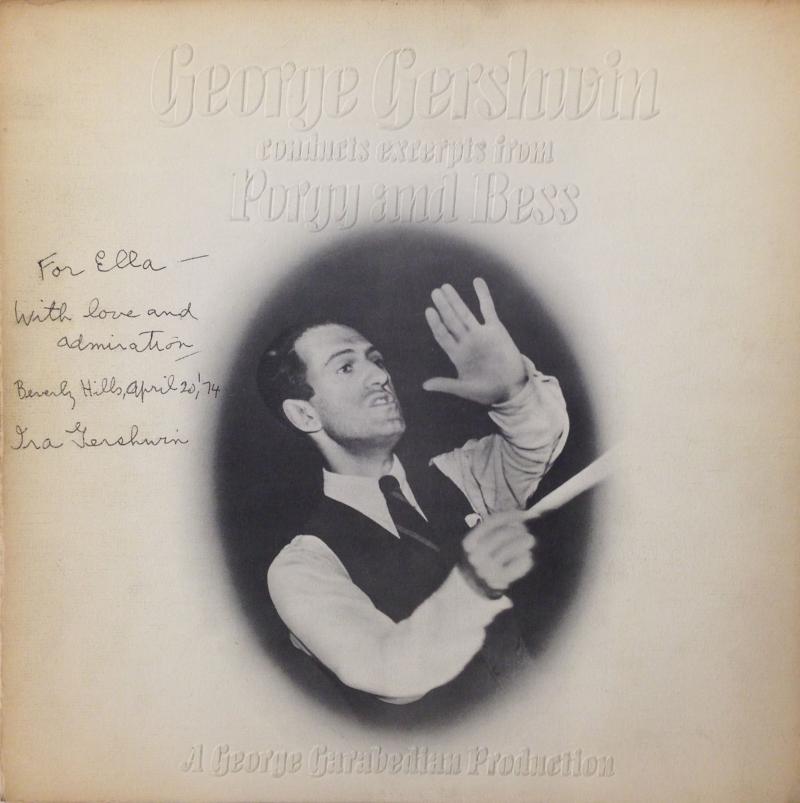 Ohio State Libraries published From Jerry to Jarka—A Breezy Memoir of a Long, Peripatetic Marriage, Grayce Susan Burian’s memorable record of the lives of two remarable people closely tied to Czech artistic, political, and cultural developments over decades.  From the mid 1960s through the mid 2000s, Burian and his wife Grayce Susan Burian, also a teacher of theatre, spent extended periods in Czechoslovakia, later the Czech Republic.  The Burians arrived in Prague just days after the Soviet Bloc invasion in 1968 and remained during that year.  Grayce Burian bears witness to the determination of the Czech people—writing about the student protests, the immolation of Jan Palach, and meetings with dissident artists including Václav Havel that she and Burian experienced.  Their research travels also included other European countries and China, enabling Grayce Burian to consider the different communist regimes in which they lived as well as echoes of the Nazi occupation—a Jewish friend remembering her escape from a Nazi camp, a young German struggling to reconcile his heritage, and the Burians themselves staying in Hitler’s private suite in Wrocław, Poland.  The Burians were also in Prague immediately following the Velvet Revolution and ideally placed to view the changes, good and bad, in process.  And in 2002, they were living in Old Town when the Vltava flooded, devastating large parts of Prague. For more information see http://library.osu.edu/blogs/theatre-research-institute/2013/07/11/from-jerry-to-jarka-a-breezy-memoir-of-a-long-peripatetic-marriage-by-grayce-susan/. 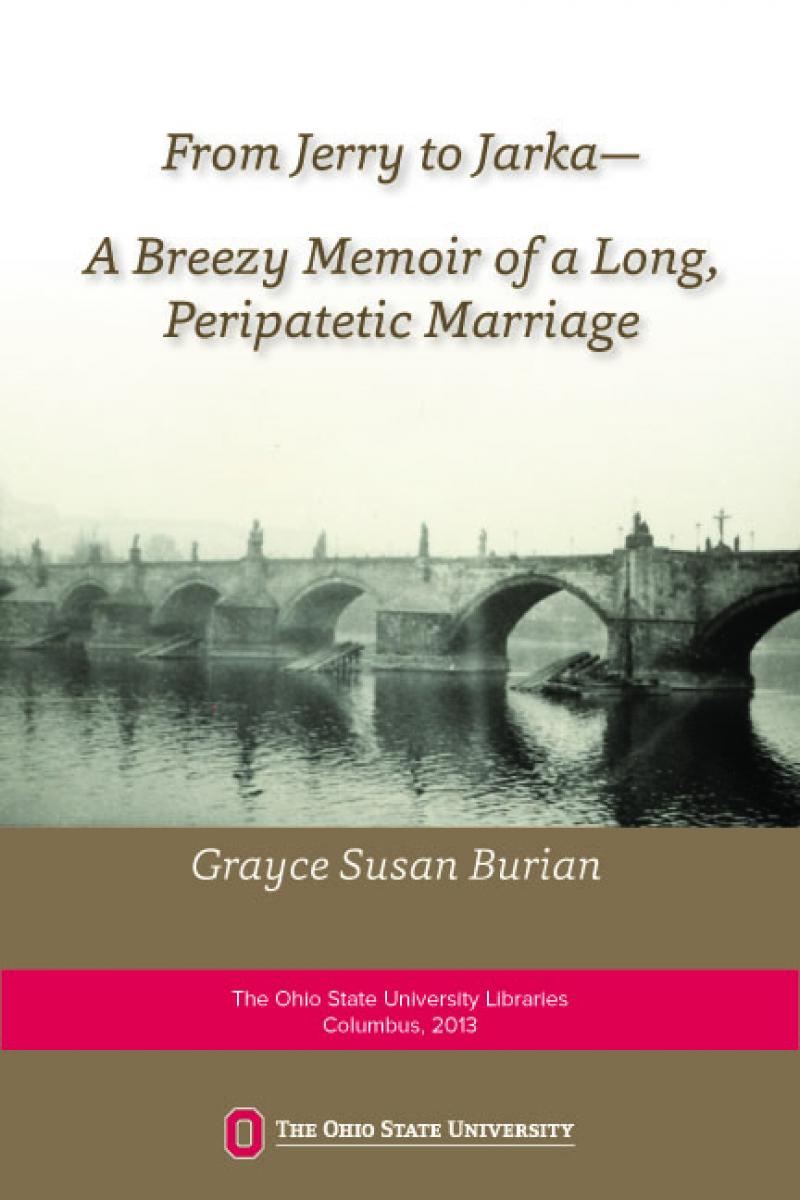 Photo: From Jerry to Jarka by Grayce Susan Burian

Alumnus and designer William Barclay came to visit the Institute in its new Thompson Library location and to review the models he has donated. 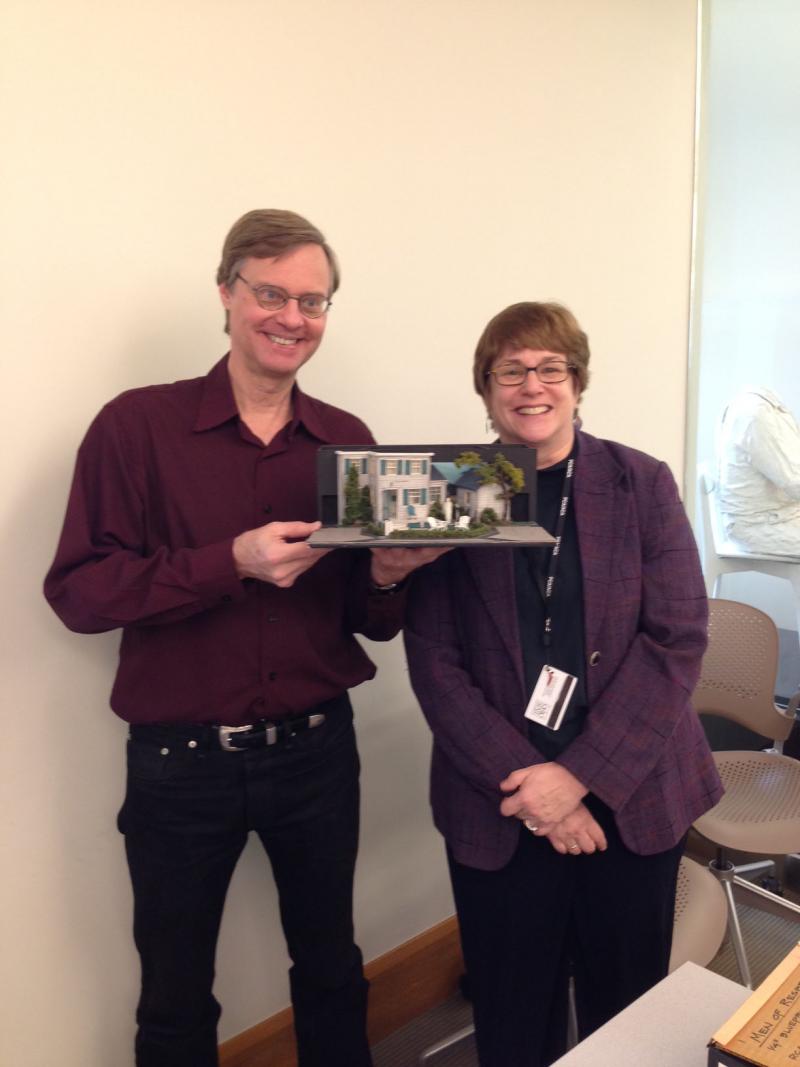 Photo: William Barclay and Beth Kattelman with Bill’s model for All My Sons

Three pieces from the Theatre Research Institute were seen by 70,681 visitors to the exhibition Strings Attached: The Living Tradition of Czech Puppets, at the Columbus Museum of Art by the time it ended in August.  “Marion Lee,” an almost full-size puppet designed by Petr Matásek  for the Department of Theatre’s production aPoetheosis, and now a part of the Institute’s Matásek holdings, remained on display in the lobby of the Columbus Museum of Art by special request for over a month after the Czech puppet exhibition closed.

Participating in OSUL’s exploration of Augmented Reality (AR) technology through implementation in Magic to Do, the January 2014 Thompson Gallery exhibition, theatre alumnus and Theatre Research Institute donor Frank Mohler recorded his voice-over description of the 17th-century theatre technology that was seen by viewers through AR as they looked at the model Mohler constructed from period designs in the TRI microfilm collection. 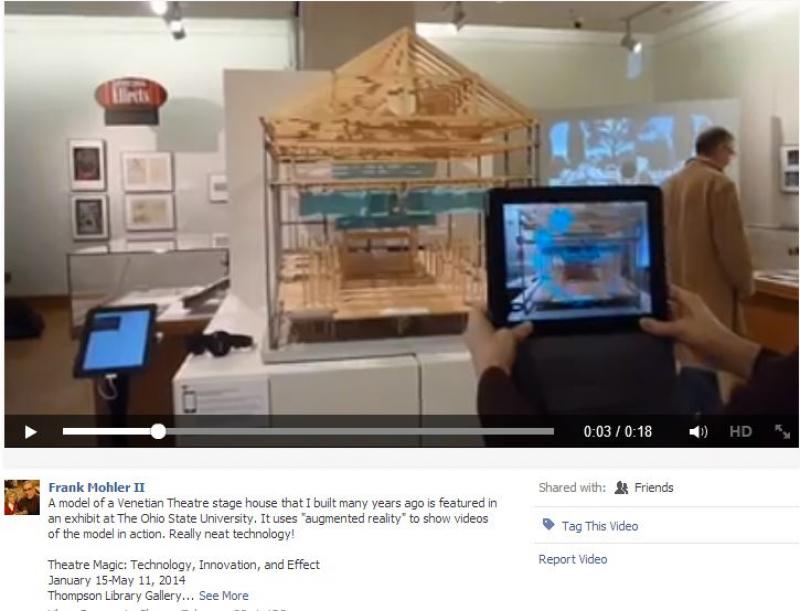 Photo: Frank Mohler’s Facebook photo and post on the Augmented Reality installation with the model of the 17th-century theatre he constructed.

In addition to cabinet and tobacco cards of 19th-century burlesque dancers in the Charles H. McCaghy Collection of Exotic Dance from Burlesque to Clubs, two additional Institute collections became available in digital form in 2013: 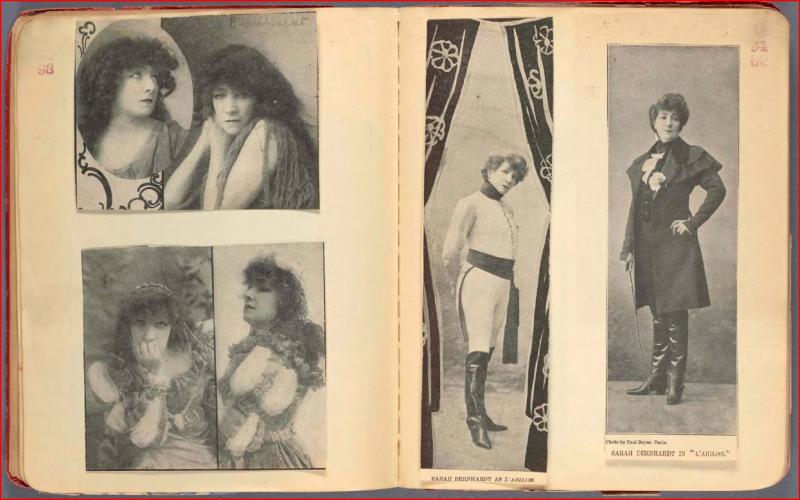 All three digital collections are available at http://kb.osu.edu/dspace/handle/1811/47555 .

TRI Fellows funded by the Dance Heritage Coalition project supported by the Council on Library and Information Resources completed their work on September 30, having processed 12 collections (401 linear feet) and created EAD finding aids.   All Lawrence and Lee Theatre Research Institute finding aids are available at http://ead.ohiolink.edu/.