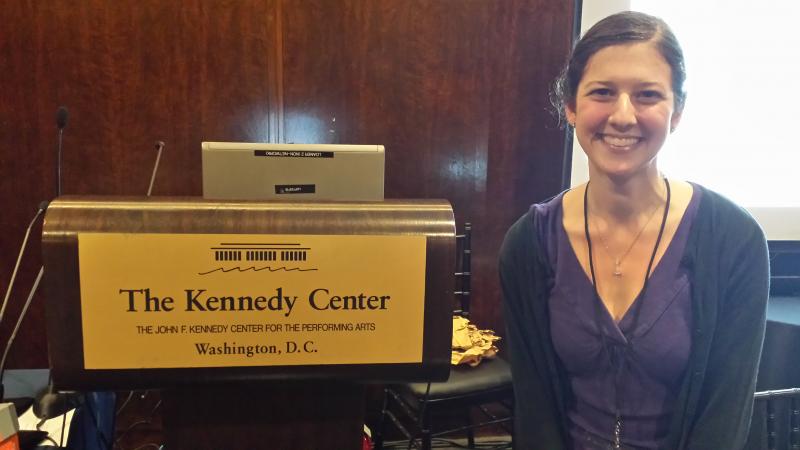 Elizabeth Harelik at The Kennedy Center Intersections Conference.
PhD student Francesca Spedalieri presented “Allegorical Monstrosity: Motherhood as Representation of the Sicilian Struggle in the Works of Emma Dante” as part of the Post-Partum Working Group at the American Society for Theatre Research annual conference in Dallas. She was awarded a grant from the Alumni Grants for Graduate Research and Scholarship to support her research on contemporary Italian theatre. 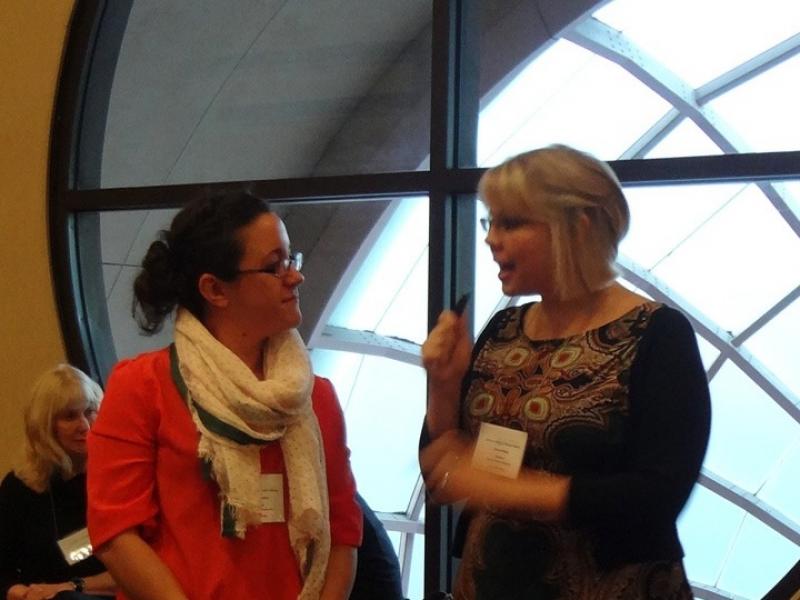 Francesca Spedalieri and Chelsea Phillips at the American Society for Theatre Research (ASTR).
MFA lighting design student Chelsie McPhilimy attended Live Design International, a lighting and projection intensive conference, in Las Vegas. She was 1 of 2 lighting designers selected to participate in Young Designer’s Forum.
BA student Corey Lipkins, Jr., wrote, directed, and performed in an original play, From the Depths of Hell, based on the life of Lakeisha Davis. Lipkins received an Undergraduate Research Grant from the Office of Diversity and Inclusion’s Young Scholars program to create the piece, which was performed at the Martin Center in Canton, Ohio.
MFA lighting design student Andy Baker was part of a project led by Professor Mary Taratino that created a large-scale lighting display projected onto the South Campus Chiller Central Plant on Cannon Drive.
PhD student Mina Choi successfully completed and defended her dissertation, “Revision of Euripides’ Tragedies by Contemporary Women Playwrights.” The members of her dissertation committee were: Lesley Ferris (chair), Beth Kattelman, Joy Reilly. The graduate faculty representative was William Batstone.
PhD student Chelsea Phillips was awarded the prestigious Presidential Fellowship for a final year to complete her dissertation, “‘Carrying All Before Her:’ Pregnancy and Performance on the British Stage in the Long Eighteenth Century, 1688-1807.” She also attended the Blackfriars Conference in Staunton, Virginia, where she led the colloquy session on Rhetoric and Verse.
BA students Andrew Trimmer and Genevieve Simon each received an Undergraduate Research Scholarship from the Arts and Sciences Honors Committee.
Spring 2014 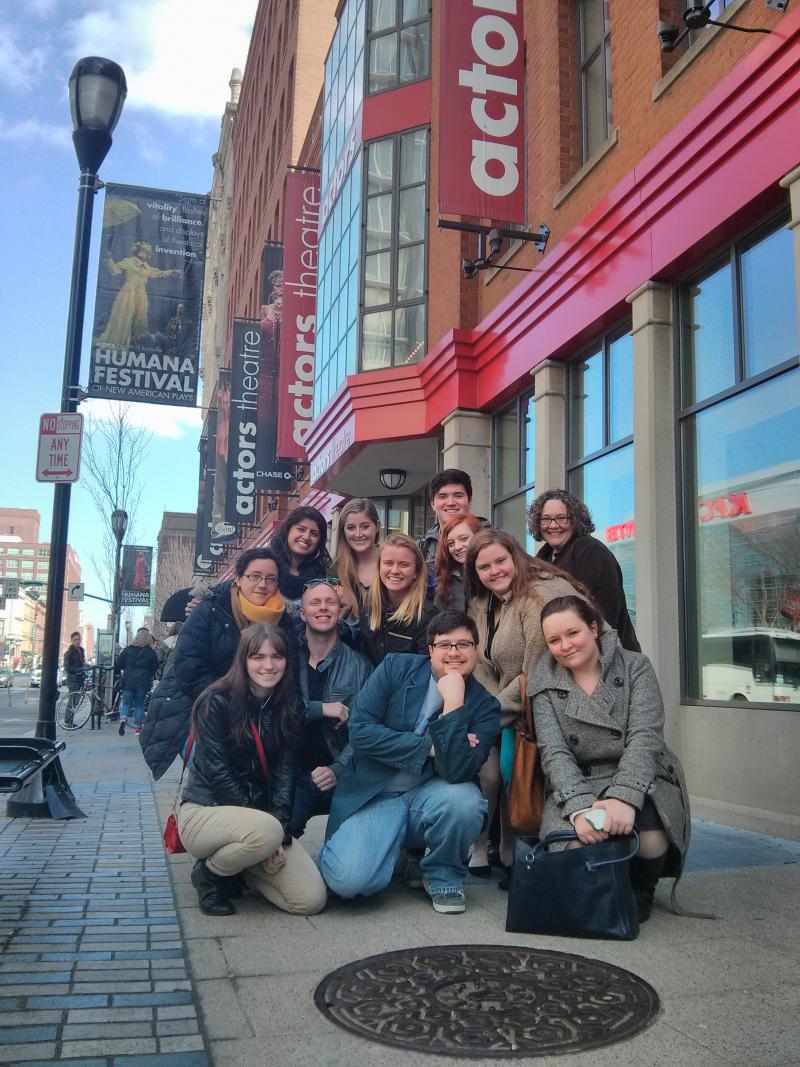 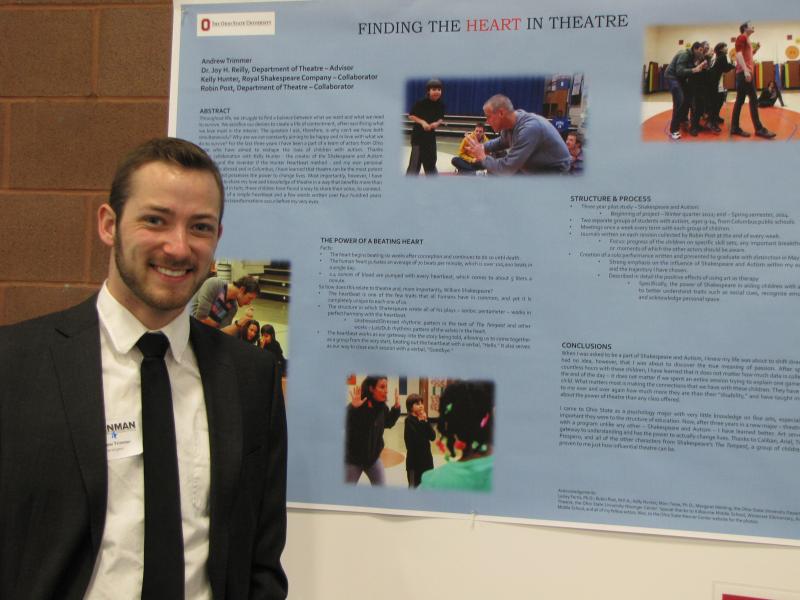 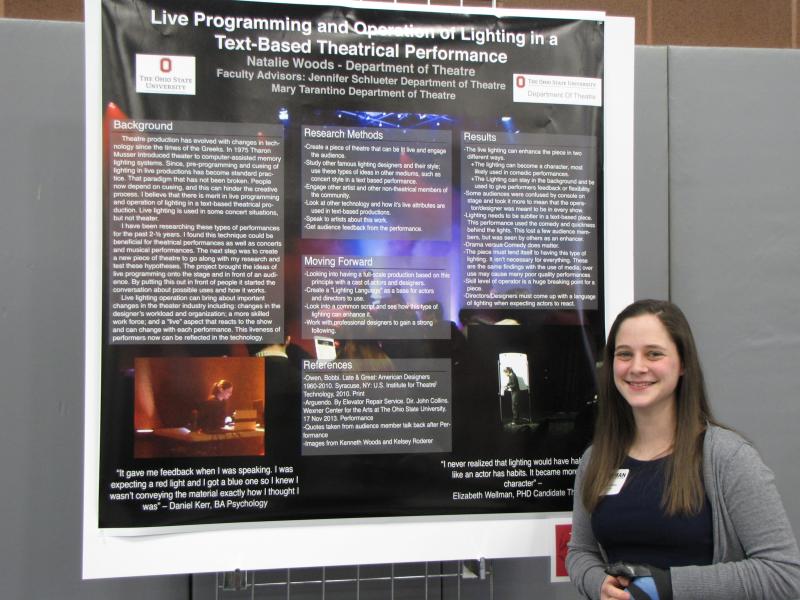 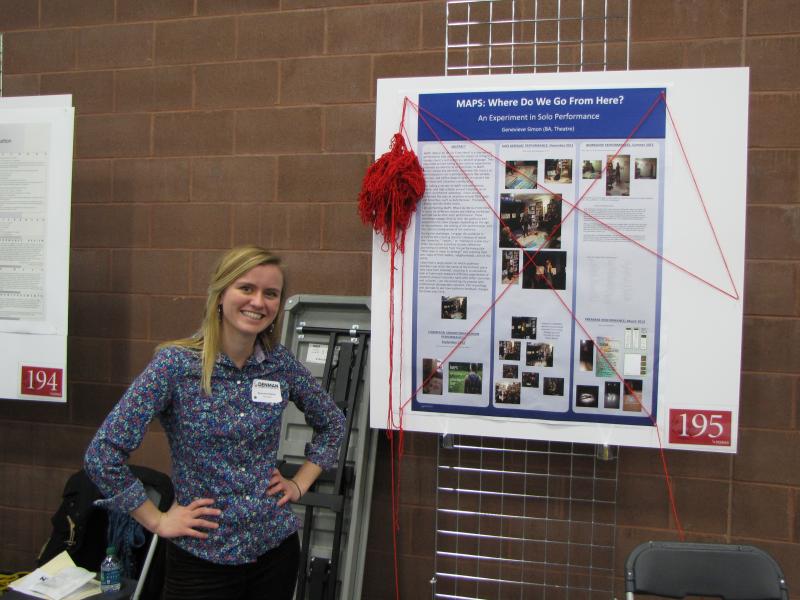 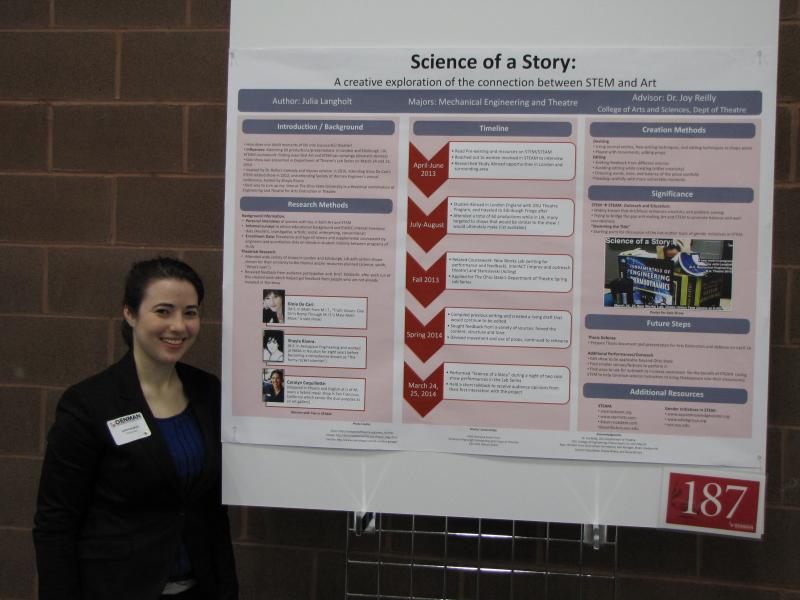 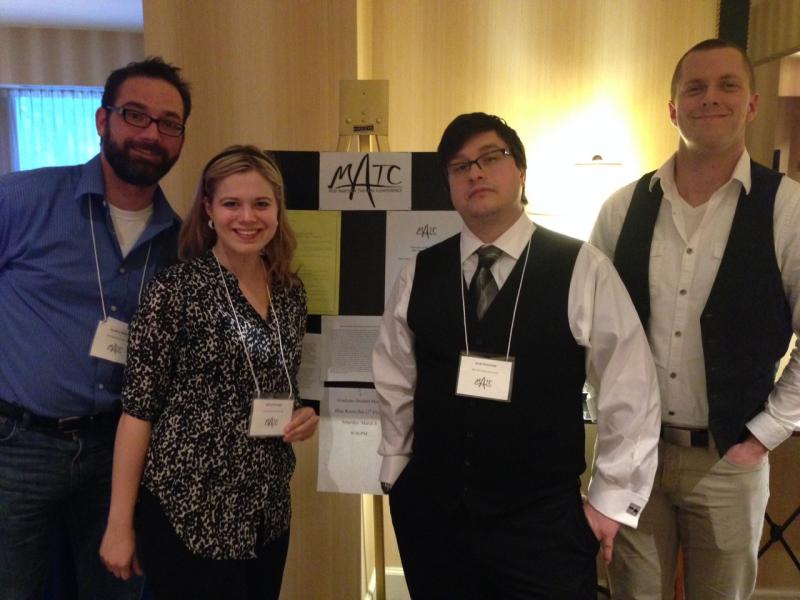 The following students were honored with Undergraduate Student Excellence in recognition for participation in this year’s Denman Undergraduate Research Forum. 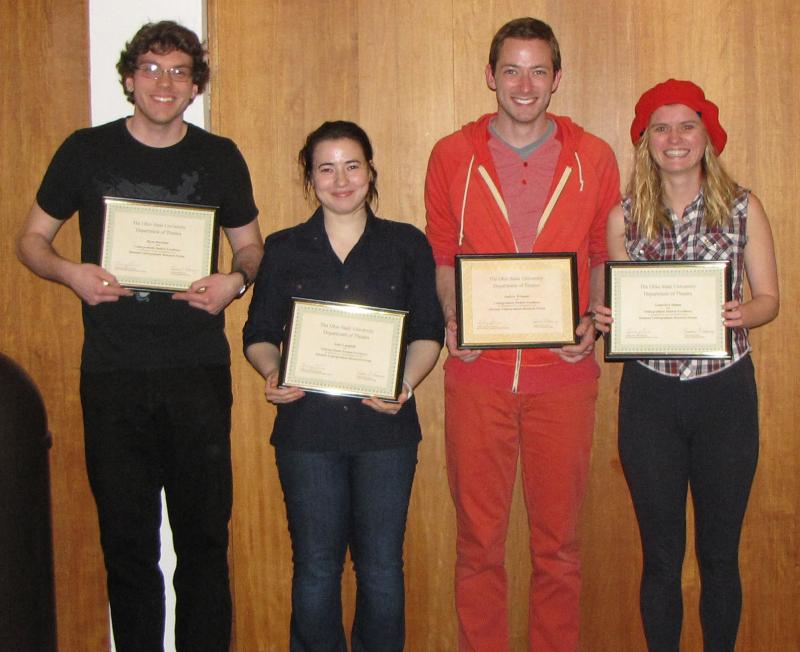 L to R: Ryan Harrison, Julia Langholt, Andrew Trimmer, and Genevieve Simon are recognized for their participation in the Denman Undergraduate Research Forum.

Denman participants from theatre presenting for their minor:

Chelsea McPhilimy, for Excellence in Teaching, Service, Research, and Creative Activity; for guest teaching Theatre 2211, service on the Syndicate Committee; for her participation in Live Design International in Las Vegas and the Young Designers Forum in Texas, her professional development through the Gilbert Hernsley portfolio review; for her lighting design for Zombie Prom, Marat/Sade, Twelfth Night, The Visit, The Rape of Lucretia, and media for The House of the Spirits. 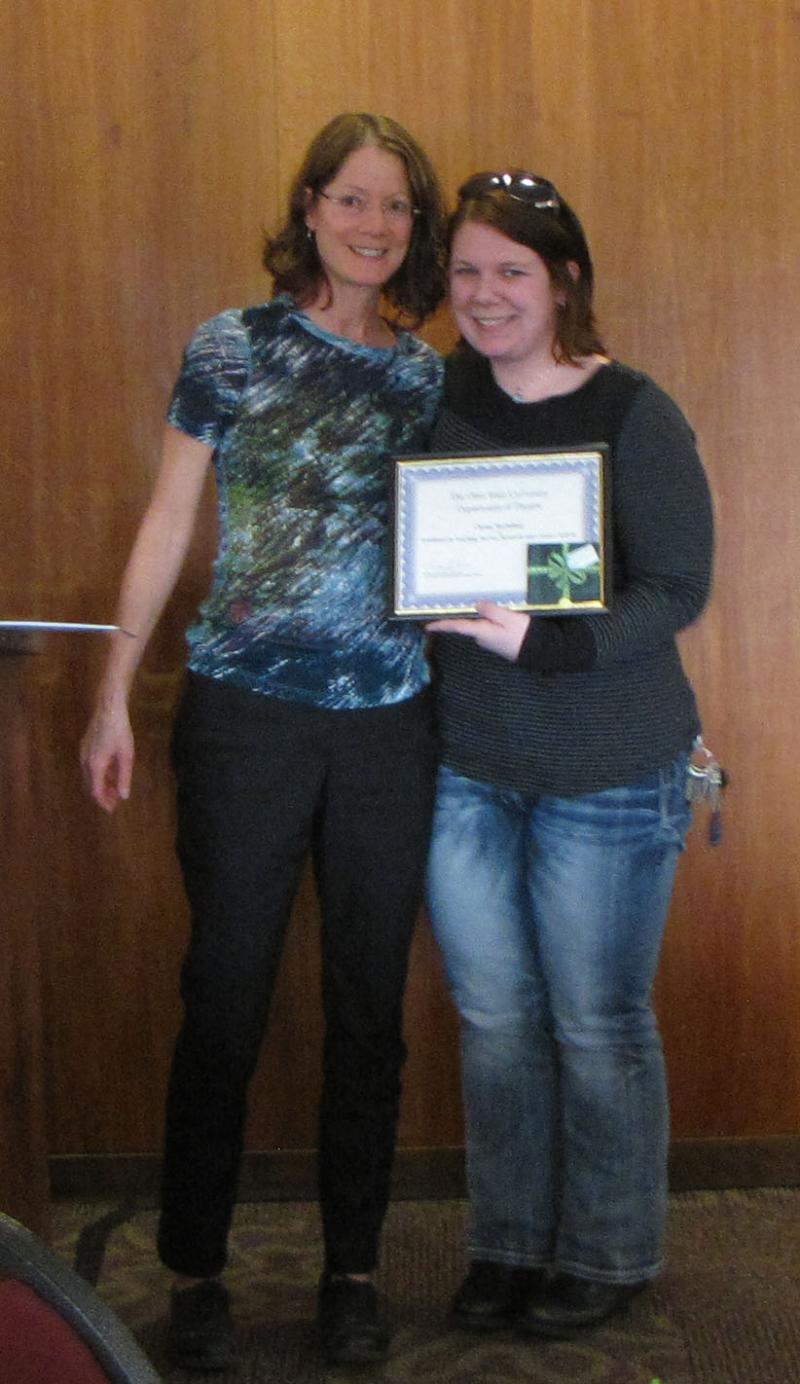 Chelsea Phillips, for Excellence in Teaching & Research. Chelsea received the Graduate Association Teaching Award (GATA) and the Presidential Fellowship based on her dissertation research Carrying All Before Her. She also received a Coca-Cola Research grant, AGGRS, and Arts and Humanities grant to conduct research in the UK, and she presented research at four major conferences – Dallas,  France, Toronto, Virginia, and two more in the UK.

Elizabeth Harelik, for Excellence in Service & Creative Activity for her outstanding work with the OSU/RSC partnership and programming by creating, teaching and leading the workshops that accompany the touring production of As You Like It, and for the marvelous job she did acting the role of Rosalind.

Max Glenn, for Excellence in Service & Creative Activity for his work as the Production Manager of the Lab Series and for the development of the Script Club. 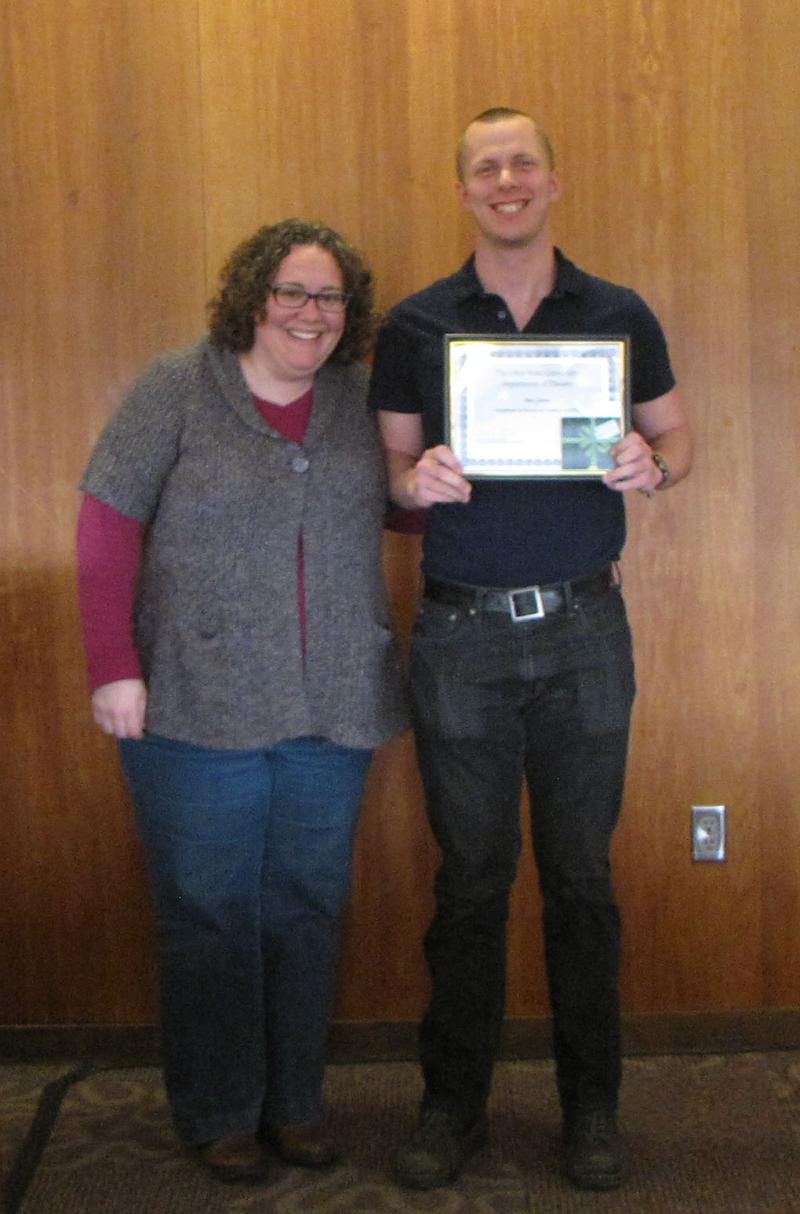 Camille Bullock, for Excellence in Creative Activity for the writing and production of her play Southern Cross the Dog at Available Light Theatre Company.

Jane Elliott, for Excellence in Research on The Gender Project and coinciding workshops, co-presenting on her research with Mandy Fox at the VASTA conference, and presenting at the ATHE conference on the Theatre and Social Change Debut Scholars panel.

Sifiso Mazibuko, for Excellence in Teaching of the TH 2831 Movement and Voice class, his exquisite command of both voice and movement and his exceptional ability to teach and inspire students to excel in bringing two techniques together. 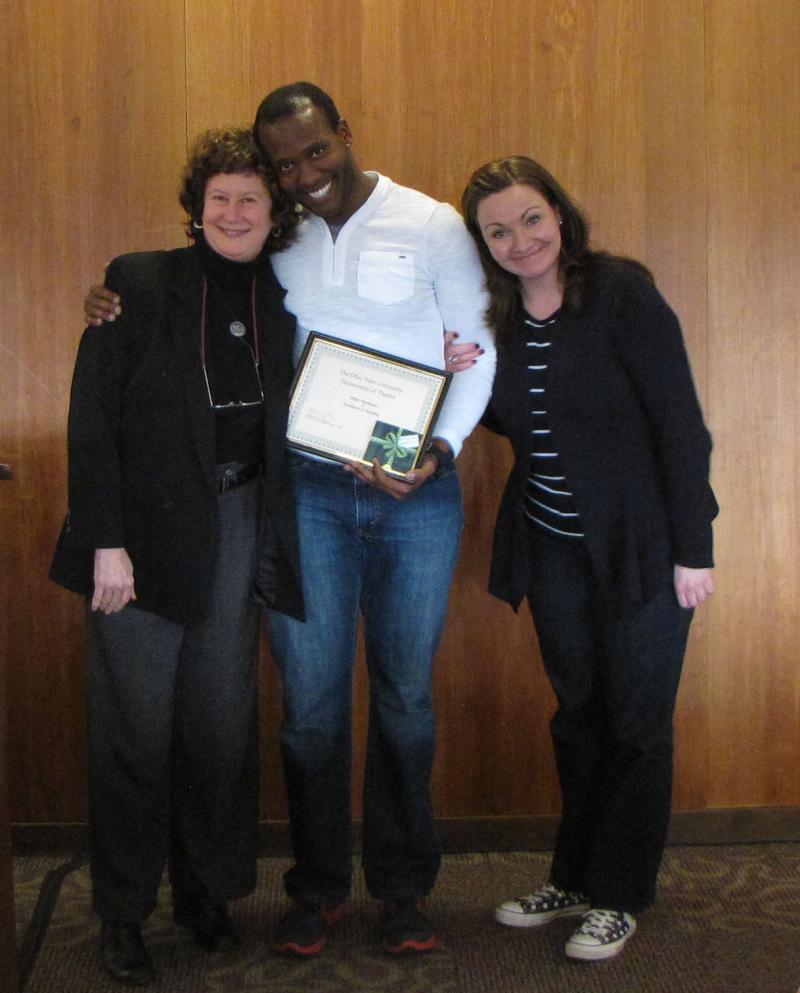 Meg Chamberlain, for Excellence in Service, for going well above and beyond the call of duty with her teaching and mentoring of stage managers and assistant stage managers; for her extraordinary abilities, time and generosity as Production Stage Manager for There Is No Silence; and for her excellent assistance with running the Mime and Movement Theatre Symposium. Meg delivers a high standard of leadership in all that she does.

Francesca Spedalieri, for Excellence in Creative Research for the superb, multifaceted job she did as assistant director of There Is No Silence, including her expertise in staging, choreography and the extraordinary animation collaboration with ACCAD.

OUTSTANDING CONTRIBUTION TO THE 2013-2014 PRODUCTION SEASON

For contributions as a stage manager:

For contributions to the scenic studio:

For contributions to sound and media:

For contributions in design:

For contributions as a performer: 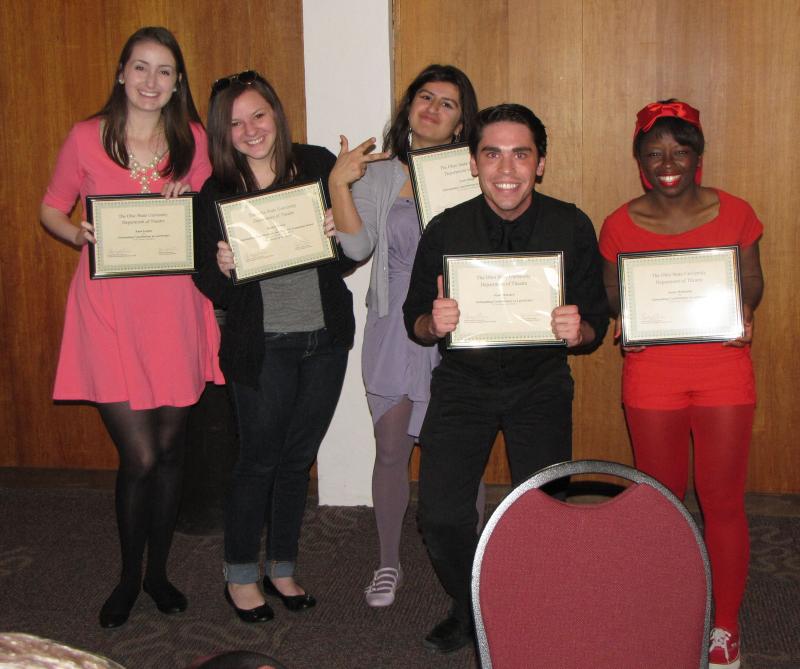 • The ensemble of As You Like It performed at 18 different schools in 20 performances, after opening at the Lincoln Theater from February 7-9. They have exemplified the best in ensemble work and have enriched the lives of hundreds of K-12 students. The acting ensemble is: Erica Beimeshe, Victoria Carthorn, Max Glenn, Elizabeth Harelik, Jay Hobson, Kelly Hogan, Caleb Inboden, Daniel Shtivelberg, David Smith, Kevin Tate, Daniel Turek. 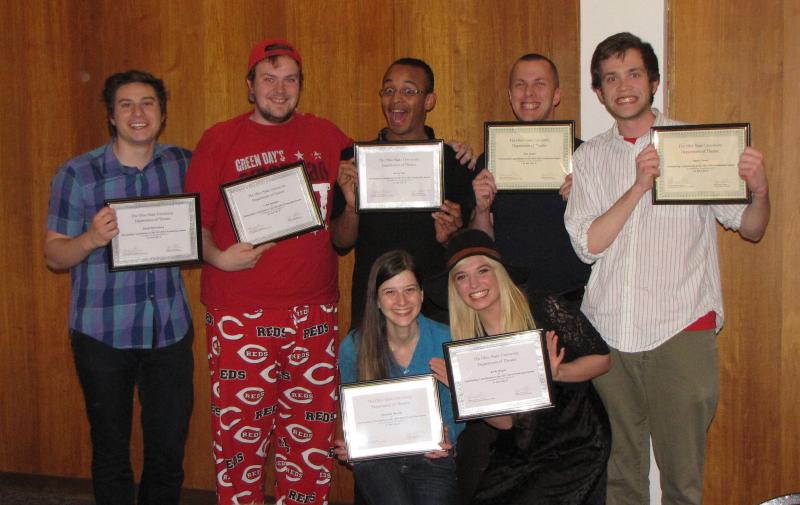 Established in 1980 in memory of John C. Morrow, professor of theatre from 1963 until his death in 1979, the Morrow Memorial Fund provides small grants for graduate student research.

Established February 7, 2003, The Aida Cannarsa Snow Endowment Fund was established to provide need-based scholarships to students interested in the arts.

The Gerald R. Black Scholarship Fund for Recognition of Excellence in Theatre was established in 1974 in memory of Gerald R. Black, a 1924 graduate of The Ohio State University.  The scholarship is intended for undergraduate students within the Department of Theatre interested in the area of playwriting.

The Michael Swink Fund for Talent in Theatre Technology was established in 1980 in memory of Michael Swink (BA 1975) and provides funding for undergraduate students who have demonstrated exceptional talent and ability in theatre in the area of design and technology.

The Roy and Addeleen Bowen Fund for Exceptional Talent in Theatre was established in 1978 to honor Roy H. Bowen, professor emeritus of theatre. The scholarship supports undergraduate students who have demonstrated exceptional talent in theatre. 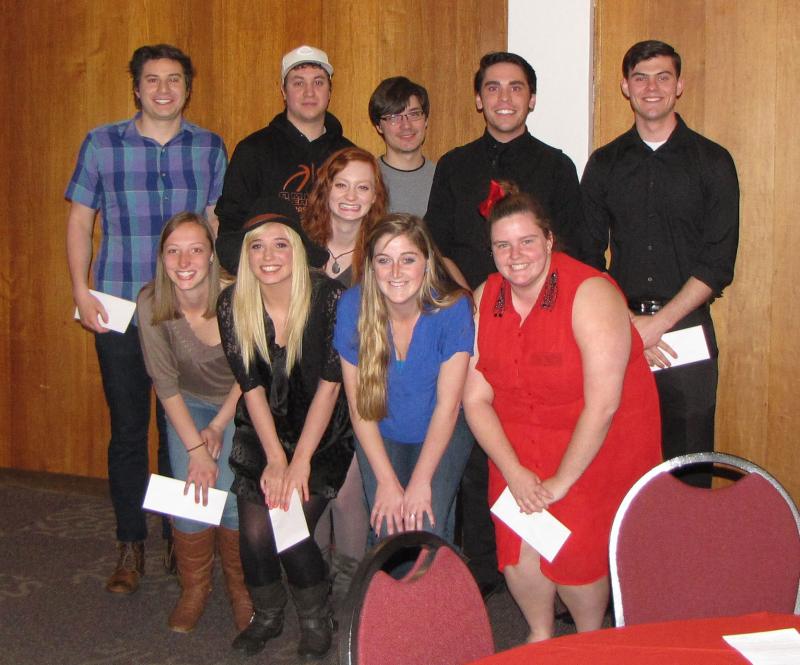 Congratulations to Geoff Wilson, the 2014 recipient of the William Case Kramer Theatre Research Fellowship.  Geoff is funded for a research trip to Bogota, Columbia to visit several libraries and archives, and conduct interviews with theatre artists. His dissertation research examines representations of violence in contemporary Colombian performance.

The Department of Theatre Class of 2014 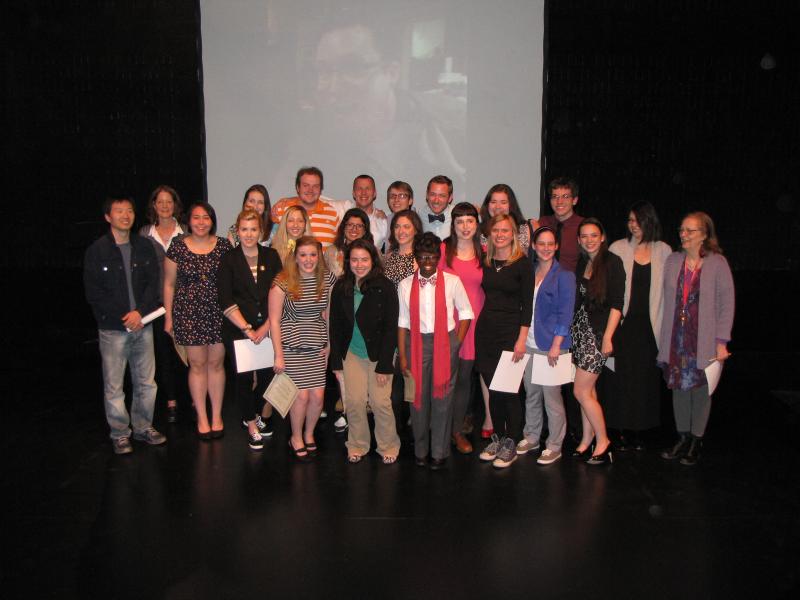