Playwright Bianca Sams, the 2013-2014 Lawrence and Lee Fellow worked with curator Beth Kattelman to explore the TRI’s Robert Breen Collection of the 1952-1956 Porgy and Bess tour for research and creative inspiration in writing her play Just Porgy.  As part of her fellowship commitment, she gave a public lecture on her project: “Using ‘Found Stories’ as Inspiration.” 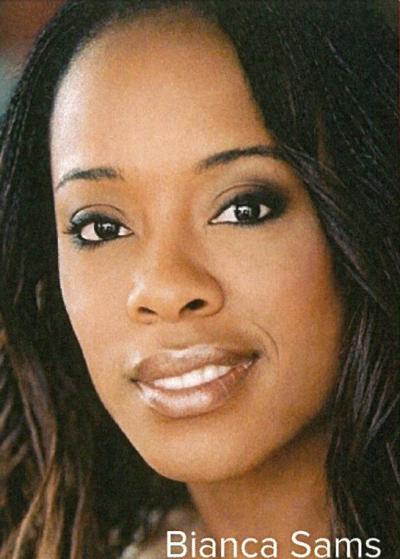 Pamela Howard, a renowned scenographer who has worked as a stage designer in the U.K., Europe, Canada, and the United States since 1960, delivered the Theatre Research Institute Lecture in the Bowen Theatre in September. Addressing an audience from Theatre as well as Slavic, Comparative Studies, and the community, Ms. Howard spoke on her work in developing Charlotte, a new “play with music” that premiered at the Canadian Stage. Ms. Howard also met with the TH6701 Research Methods and TH8000.06 Advanced Lighting classes in the Special Collections seminar room. 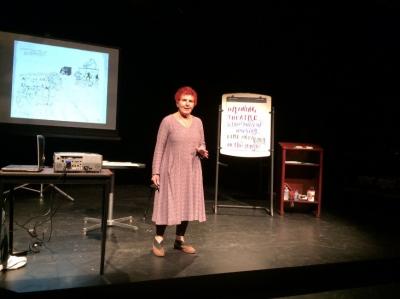 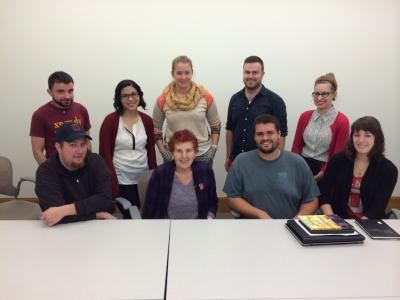 Graduate students meet with Ms. Howard in the THO classroom.

In collaboration with the Department of Theatre’s Emma Dante Project to bring the Italian theatre company to the United States for the first time, the Theatre Research Institute co-sponsored an interdisciplinary symposium—“Blurring Boundaries without Burning Bridges:” Italian Contemporary Performance, the Theatre of Emma Dante and Beyond (keynote speaker Howard Shalwitz was the 2014 Margo Jones Awardee)—and mounted a special exhibit which drew approximately 3400 visitors during its three-week run in the Special Collections display area. Those visitors included 300 students from 8 sections of TH2100 Introduction to Theatre as well as members of Emma Dante’s company. The company performed their most recent work Operetta Burlesca (Operetta Burlesque) in Thurber Theatre. 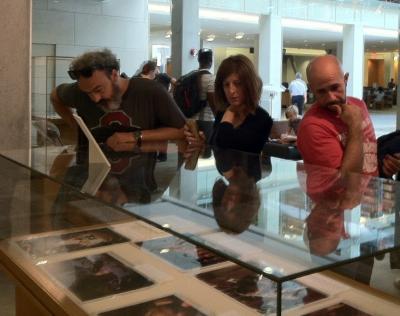 Theatre 5331: Originally designed through CEG support and taught multiple times to explore the TRI and RBMS film resources, Scott Spears’ Screenwriting class was treated by Beth Kattelman to a presentation that included the newly-acquired continuity script from the 2012 Universal Studios’ film TED which was purchased specifically to use in this class. 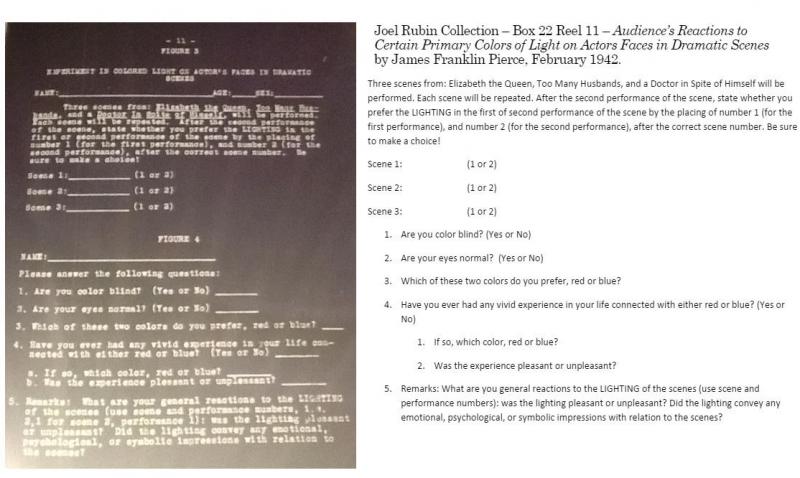 Graduate student Sarah Lawler creates a demonstration and survey of color and audience response to scenes lighted with primary colors of light.

In May, members of the Lawrence and Lee families and representatives of the TRI travelled to Princeton New Jersey to present the Margo Jones Award to Emily Mann, Artistic Director of the McCarter Theatre. Mann has piloted the McCarter Theatre for 25 seasons, directing, writing, and/or overseeing over 200 productions in her time there. Under Mann’s direction, the McCarter accepted the 1994 Tony Award for Outstanding Regional Theater and the 2013 Tony Award for best new play for Vanya and Sonia and Masha and Spike (by Christopher Durang). Speakers at the ceremony included Nadine Strossen, Jade King Carroll, and Christopher Durang, who received his own Margo Jones Award (along with Marsha Norman) in 2004 for his work with the Juilliard School’s American Playwrights Program. 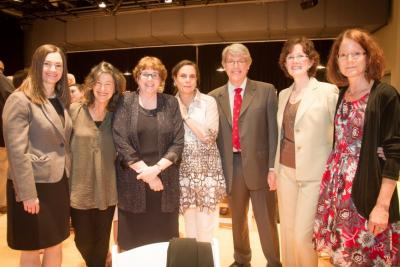 This year the TRI acquired some world-class collection donations and additions. Of particular note are:

As a result of research conducted while on a Lawrence and Lee Research Fellowship, internationally recognized magic lantern authority Mervyn Heard published an article in USITT’s publication Theatre Design and Technology, on the Theatre Research Institute’s Joel E. Rubin pose plastique glass slide collection which is one of the largest existing collections in the world. 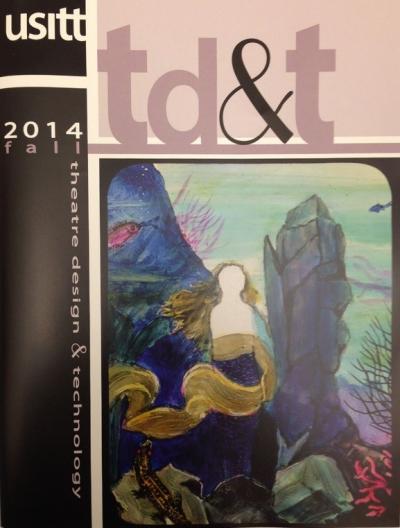 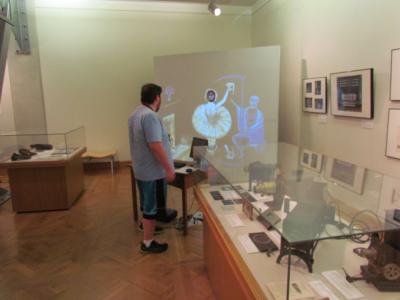 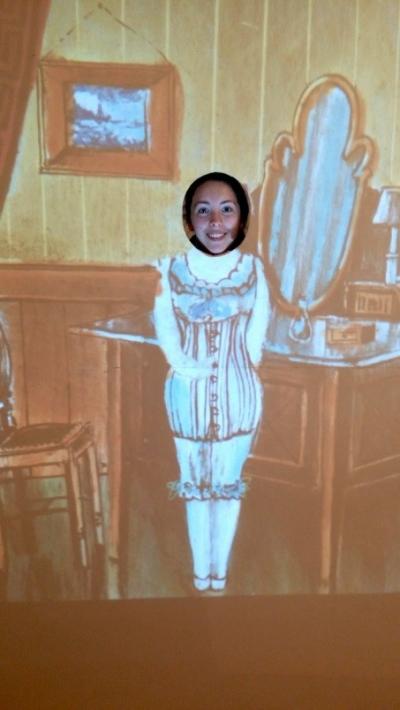 Posing in the pose plastique photography station with one of the last 19th-century projections used in popular stage entertainments. 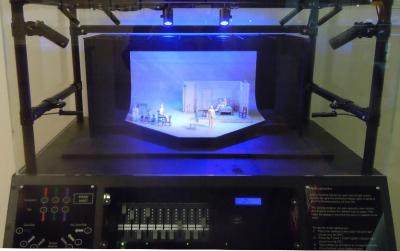 The interactive lighting display that allowed exhibition visitors to experiment with their own lighting for this stage model by Broadway designer Tony Straiges.

In March 2015, the THEATRE MAGIC exhibition travelled to the National USITT conference held in Cincinnati, Ohio, giving attendees an opportunity to view some of the TRI’s wonderful holdings. 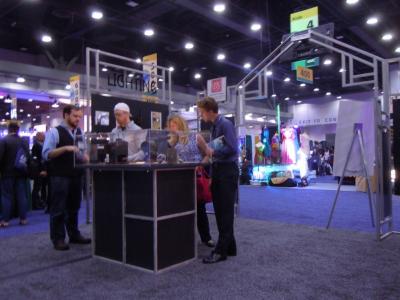 In addition, Mary Tarantino participated in the USITT panel discussion, “Tom Skelton: His Life and Legacy” and spoke about using his collection in seminar courses. 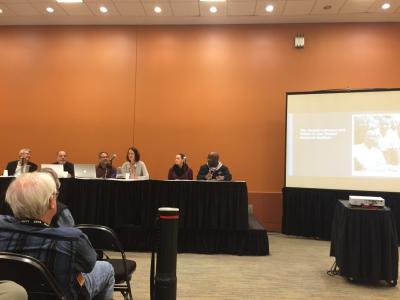